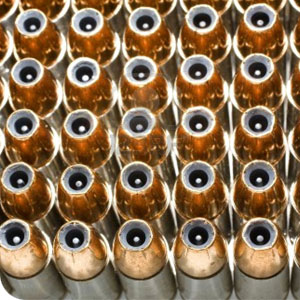 In general, I don’t consider myself a naive person. I understand how business works. I get the whole “supply and demand” thing. I also know that the demand for both firearms and ammunition have skyrocketed since last December but that’s no reason for companies to be killing consumers with the blatant ammo price gouging that’s been going on. Don’t get me wrong, they are not all doing it. And I expect some rise in prices just because ammo manufacturers can’t keep up with the demand. But, some retailers are really out of control with their ammo price gouging tactics and I hope people will stop buying from them. 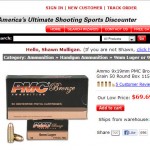 Let’s look at some specific products and prices for an example. A couple of weeks ago I purchased a box of 50 rounds of 9mm PMC ammo from a local gun shop for $23. That works out to about 46 cents a round. More expensive than usual, but not terrible. Online, I found two retailers selling the exact same ammo for $15.99: Hyatt Guns and Bujco Firearms which works out to a more reasonable 32 cents per round. But, that same ammo is being sold by CheaperThanDirt.com for $69.69! That’s a whopping $1.40 per round! That insane, and not insane like Crazy Eddie’s prices. It’s a complete ripoff and a should be a crime. Why would anyone pay that much?

This is not the first time CheaperThanDirt.com riled me and others. Some of you might not remember, but in the days following the Newtown tragedy, CheaperThanDirt followed in Wal-Mart’s and Dick’s Sporting Goods’ pathetic footsteps by bowing to the liberal media who was (and still is) vilifying firearms. Wal-Mart announced a temporary freeze on selling firearms and Dick’s followed suit by halting all AR15 sales. No reason was given, but they clearly didn’t want to be lumped in with the “evil” gun sales industry. CheaperThanDirt followed suit by also halting AR15 sales. Again, no reason was given – it was a just a “temporary” hiatus on selling AR15’s. A day later, after backlash on Facebook and Twitter, CheaperThanDirt updated their message stating that the hiatus on AR15 sales was due to limited supply. But, the damage was done. Many of us knew they caved to the gun grabbers and many vowed to never buy from them again.

Well, clearly CheaperThanDirt didn’t loose their entire customer base because they keep on selling both guns and ammo online. However, their ammo price gouging tactics is causing a stir in the community again. People are not going to give in to there ridiculous prices just because they are one of the few online retailers to have any ammo in stock. I for one hope people will boycott them altogether as I find this kind of thing outrageous. They aren’t the only one, either. BulkAmmo.com’s prices are way up from six months ago. The cheapest you can get 9mm rounds there is $40 for 50 rounds. Most of their boxes of 25 rounds are over $30. They’ve lost me as a customer, too.

So, who are the good guys? Well, as I mentioned earlier, both Hyatt Guns and Bujco Firearms have kept their prices low. I’ve found them local for good prices, too, it’s just hard finding them in stock anywhere. I also applaud MidwayUSA who have kept many of their prices the same as before the rush began. They say that in times of trouble or trials, that you can see someone’s true colors. In my eyes, both CheaperThanDirt and BulkAmmo has shown themselves to be opportunistic thieves whom I encourage any and all to avoid for their ammo price gouging ways.

Apr 27, 2013S. Lawrence
Liberal Hypocrisy: What the Kermit Gosnell Story Reveals About the Left and the Mainstream MediaSons of Guns is Back - Thank You Discovery
Comments: 111